The precious pearl — adored by the world since the ancients — is June’s official birthstone. Today we’re featuring one of the most celebrated natural pearls, La Peregrina, whose history is steeped in both legend and lore. Meaning “pilgrim,” La Peregrina was considered a treasure for Spain, and has been called the largest, finest example of a teardrop-shape natural pearl, weighing in at 55.95 carats. 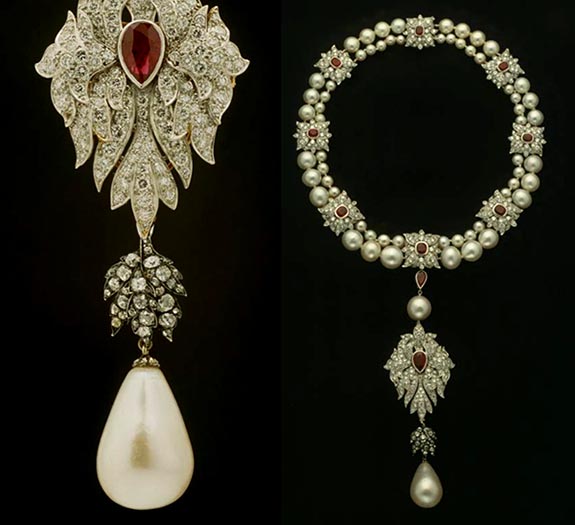 After its discovery in the Gulf of Panama in the 16th century, King Phillip II of Spain gave the pearl to Queen Mary I (Mary Tudor). It has also been owned by Spanish royalty, the Bonapartes of France, and the British Marquis of Abercorn. In 1969, Richard Burton spent $37,000 (outbidding a prince at Sotheby’s) to buy La Peregrina for Elizabeth Taylor as a gift for Valentine’s Day.

La Peregrina, which sold at auction in 2011 for a record $11.8 million, was rumored to be nearly eaten by Taylor’s dog shortly after she received it. In a Caesars Palace suite, Taylor was wearing the pearl on a delicate pearl and diamond chain. She suddenly realized it was gone. She looked down and saw her dog happily chewing on something, and in a split second, reached down and pulled the pearl and diamond pendant out of the dog’s mouth. The pearl was unscathed.

Taylor then asked Cartier to reset La Peregrina with pearls, diamonds and rubies. She wanted the necklace to resemble the painting of Mary, Queen of Scots, who was wearing it as a choker. The pearl’s original setting can be seen in Taylor’s cameo in Anne of the Thousand Days (1969) – and the new, more exquisite setting in the films Divorce His — Divorce Hers (1973) and A Little Night Music (1977).

Interestingly, the close call at Caesars wasn’t the only near-misfortune for La Peregrina. According to legend, it was once lost in a sofa at Windsor Castle – and a duke’s wife once misplaced it at a family wedding and later found it in the bride’s train.

Natural pearls like La Peregrina are exceedingly rare and treasured because they are created by mollusks randomly, without human intervention. When a grain of sand or similar irritant sidles between the mollusk’s shell and its mantle tissue, the process begins. To protect itself, the mollusk instinctually secretes multiple layers of nacre, an iridescent material that eventually becomes a pearl. Cultured pearls, by contrast, are created when a bead is embedded inside the body of the mollusk to stimulate nacre secretion.

In 2005, La Peregrina was one of 12 rare pearls featured during a six-month exhibition at the Smithsonian National Museum of Natural History called “The Allure of Pearls.” Other specimens included the Hope Pearl, the Drexel Pearl, the Black Beauty, the Pearl of Kuwait, the Queen Mary Brooch with two large natural pink conch pearls, the South Sea Drops, the Survival Pearl, the Pearl of Asia and the Paspaley Pearl. La Peregrina was loaned for the presentation by Elizabeth Taylor, of course.